That Fleeting Moment and I

Roar of an airplane woke me up and I found myself in a strange room but it didn't take long time for me to realize I was in Kathmandu Medical College’s cabin number 467, near Tribhuvan International Airport. I was there for one night as a company for my friend Prabin, who became a proud papa of a cute baby girl just a day before.

It was neither cold nor humid morning but I longed for the warmth of sunshine to greet me through that blue curtained window. I waited long cuddling blanket and fixing my lonesome gaze at the window. My mind was stirred with all sort of curious thoughts of, how one would feel being a papa. It must be euphoric and I have seen Prabin's face shined with delight holding his daughter for the first time. There was a wonderful expression in his face. 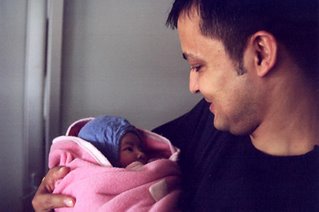 I jogged back to those beautiful moments of a day before and I was happy but the reality I survive seemed so surreal. All of a sudden I felt strangely empty. Few moments later I was distracted by the radio frequencies blaring morning news at the top of their megawatt as if they could eradicate country's fever of peace talk. Though the whole nation is engulfed in political turmoil but for me it looks pretty ungainly maze of contrast realm.

Some amiable voices erupted outside the cabin and my stray mind shifted its gear toward that eruption. It was girl gossip that some health assistants and sisters of the medical college were enjoying. I secretly tuned my ear to hear their hot agendas. One of them was telling a story about her neighbors, a newly wedded couple and how they are planning to go abroad. She sounded so chatty and the titbit which she was enclosing about her neighbors astonished me. And I thought wow! what a remarkable piece of intelligence she got. Another sister interrupted her and said that one of her patient was so erratic and she was having difficulty to attend. She added, patient like those can make her nerve go boil. A pang of rage triggered in me and I murmured, how come a person holding such a care taking profession could say so? And before I did find a satisfying answer another girl snapped to new topic and started to tease this sister about her long phone calls and asked were those call from her someone special. In low voice she revealed about her secret admirer and told them how crazy he is for her. And swiftly they all went wild giggling. Ripple of those giggle caressed me and I grinned knowing their little secret.

I reached for my bag and pulled out a book but my mind escorted my eyes around the cabin to scrutinize its features. Windows were draped with blue curtain symbolizing color of hospital otherwise blue color cools me. Two typical metal hospital beds and one with wheels on its legs for more portability. At left corner there was one wooden drawer with mirror, which I think was something unusual, otherwise medical cabin won’t get equipped with mirror. There were lots of electric light sockets, but only one fluorescent light was functioning properly and I think that was enough clues to speculate efficiency of management of the Medical College. A door at the left side leads a small balcony to the north and got a nice view of mountain. Another window has a glimpse of Tribhuvan International Airport and some nearby houses. On the roof of one particular house, a pair pigeon grooming each other and it was beautiful and gave sense of a canvas hung in the cabin.

It was about 7am, Prabin woke up and threw me a weary glance indicating he still need more sleep. Obviously being a papa of a 'one day old' daughter definitely has drained him both mentally and physically. I stared at his face and fantasized what if I could catch some of his euphoria of holding this pride of a 'Papa'. I guess no matter how hard I tried I would never be able to give shapes to those joys into words to portray his exact feelings. Being one of his long-time friend and a keen photojournalist, for me it's been a heck of opportunities for me to get involved various parades of his life.

I got up from the small flat bench where I slept that night and went for bathroom. Within 10 minutes I came back to wrap myself into blanket. Warmth was still there proving its trust and care for me. Slowly morning began to get mature and I waved that fleeting moment happily.
Posted by Jitu'cha at 8:53 AM