It's 16th of December 2006, a special day for a group of young people. It was the day YOUTH Hands For Change was formed.

It was already eleven in the morning by the time the group had assembled and started from Boudha. The destination was Sundari Jal where we were supposed to camp for a day. The event, Leadership Training Camp, was organized by the Nodan Club and no one was sure how many people would actually be participating.

We were initially a team of thirteen - Raman Dai, Sunil Tamang, Sahadev, Manohar, Rajan, Jitu Dai, Krishna ji, Narayan Sir, Bhoj Raj ji, Rajan Dulal, Surendra, Yogendra and I, Smriti Lama. But Prabin had joined us by nightfall thus making us an even numbered team of fourteen. For most of us since it was the first time we were camping everything was interesting and a novel experience. 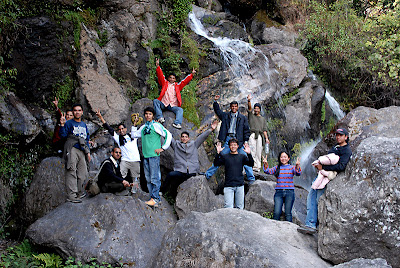 Immediately after introductions it was clear that the team assembled was a unique one for no sooner had we started on our journey than the members started cracking jokes, sharing anecdotes and engaging in discussions on grave topics like Child Psychology.The climb up to reach our campsite was a very difficult one and the pressing heat did not make it any easier. I do not take well to physical effort and the sun well and was very red and huffing and puffing the whole way up. Evidently, it pleased Sahadev so much to see me that way that he mentioned it later in the circle of trust as his most memorable incident.

We reached our destination at around one in the afternoon which was pretty good considering the very steep climb had taken us only about an hour. Raman Dai led us through a couple of games which were like ice-breakers to make us feel comfortable with each other as a team and help us memorize each other's names. It was then that we named our group YOUTH - Hands For Change. Since we were surrounded by picnic-goers we did not in the least feel unappreciated for people kept gawking at us and for a minute there we got to feel like celebrities.

After an hour or more, the crowd had dispersed and we prepared ourselves a light snack of bread, peanut butter, jam, etc. When I was younger, I would read about such snacks in Enid Blyton novels and grudge them that meal but I found that I like reading about them more than actually eating them. Not that there was anything wrong with it but once you have reached the campsite you get so excited that it doesn't matter what you eat.

The whole process of pitching our tents was so much fun and Krishna got awarded for having the best tent and all of us who helped him pitch it were so proud. We were especially glad about our camp site because we had a beautiful lake for our front yard and were surrounded by lovely green hills from everywhere. I swear I have not seen a night sky like the one I saw there in a very long time. Many of us even got lucky and saw shooting stars. 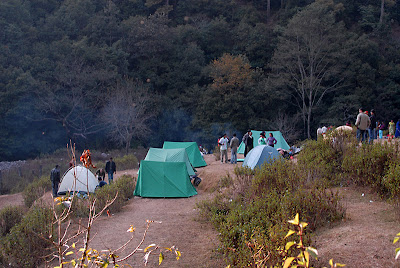 Most of the games we played that day aimed at building trust and teaching us to communicate among each other as a team. We did the one where the whole team catches a member who lets go from a height. My personal favourite was the one where everyone was the blindfolded and taken through an especially difficult trail. Puspa Dai helped us with the task by leading the group. By the end of the evening more than one of us had wet and muddy shoes but we had never had never felt better. 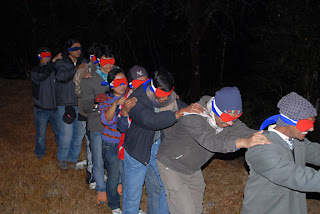 After our fun and games it was time for some sight-seeing. We went to a hotel and from the balcony we could see Kathmandu in all its glory at night. Kathmandu looked like an extension of the starry night sky and we kept looking at it. It is true that many things can be hidden under the cover of darkness and from where we were we could not see the pollution in the city. Surendra and Yogendra were the group favorites as they weren't very keen talkers and so everyone kept asking them to say something - anything. Yogendra sang a song by Narayan Gopal and everybody joined in. We took our meals there and returned to our camp site. 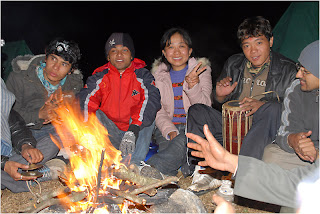 We built a camp-fire and sang songs till late in the night. Manohar turned out to be quite the singer of the group and was the life of our little party there. We also had a game of antakshari and the other team put on their creativity cap and sang some instant songs and Sunil, who was in our team, couldn't sing very much because he would start coughing as soon as he started singing. In the middle of our games we were interrupted by cries of wild cats but we discovered the next day that the jungle was full of monkeys so they were probably the ones responsible for those noises. I am scared of wild cats but even more scared of monkeys so it was probably for the best that we didn't know the source of those cries. 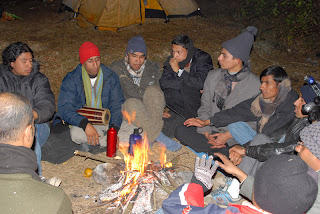 Narayan Sir who was comparatively quite that day shared some of his stories with us and made us laugh but it was Krishna Ji who stole the show. He regaled us with some very interesting tales of his childhood and while we felt very sorry for the little boy who was hurt and lame and who lost one of his slippers, none of us could help laughing at the boy who said, "I didn't do anything, I just waited for them". None of us will ever look at Katar the same way again. 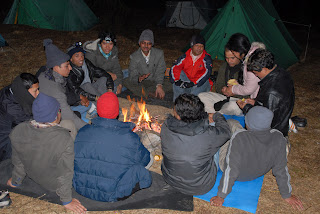 We finally said Goodnight at around one in the morning but not before we had all participated in Solo (meditation). All of us went to a solitary place and each stood at a distance from the other and we were asked to think about our lives since the time we were little kids. Since I had never done it before, I must admit that I spent most of the ten minutes star gazing and getting scared in the dark. To top it all, some of our friends including Surendra and Yogendra got lost on their way back and Krishna Ji could not control his laughter.

We started the next day off with some Yoga and meditation. Narayan Sir, Jitu Dai and Krishna Ji shared their experiences with the group. Like Narayan Sir said during the time we were practicing our breathing exercises we felt like the birds had all come near us and were singing near us. It was such a lovely start to an already exquisite day. After that we went to a hotel and had some breakfast. But even that time was mentally stimulating as we all discussed on topics like, "How much frank is frank enough?" Jitu Dai told us about his love for pigeons and everyone was surprised when he told us that some pigeons could stay in air for more than eight hours. 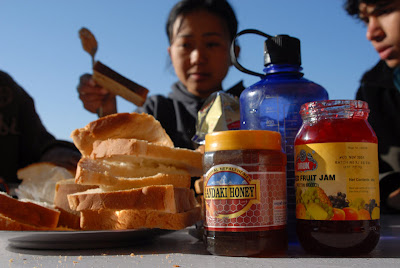 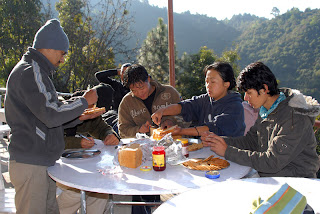 We returned to our campsite and played games like the ones we had played the day before. Raman Dai with Sunil's help led us through all the games. Though one wouldn't think it, those games turned out to be very dangerous and if you don't believe me you should ask Sahadev who was blindfolded and whom I saw hanging on to a friend in a "Banmara Ko Jhyang". Since the campsite was littered with paper-plates and plastics we cleaned it up a little before leaving. So we not only learned how to have fun as a team but also to clean up as a team. 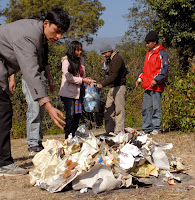 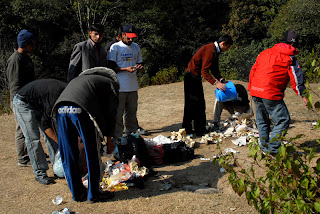 But we weren't done yet. Raman Dai asked us to give our feedback on a sheet of paper. Then we formed a circle of trust and each person gave a pen (thanks to Raman Dai) to another person. Raman Dai thanked Sunil and Rajan D. for providing us with the tents and sleeping bags respectively for the whole team. Rajan surprised us all by his kindness and generosity when he gave his jacket to Sambhu, our help.

Needless to say, Jitu Dai entertained us with his jokes the whole time we were together and there is no denying that his jokes are great and that he takes fabulous pictures but his mathematics is the thing that is truly outstanding. So the next time you meet him, ask him how much is 5 + 5.
Overall, those two days were the best two days spent of our lives and we learnt many things from each other and Raman Dai. Everyday in our lives we come across little kindnesses, respect, team spirit and wonderful people but there, far from our routine lives, I think, we appreciated it and appreciated each other and the camaraderie between us. Though it sounds very cliché I think I changed a little bit from inside in Sundari Jal and I will never be the same again. Being among such kind and positive people helped me look at life differently and in a good way. I hope others felt that too. And I feel hopeful that it is just the beginning for Hands for Change. 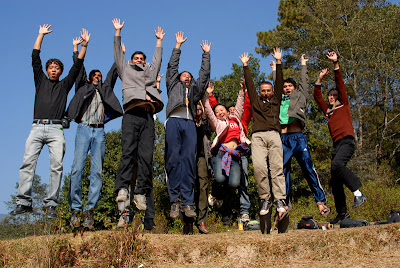 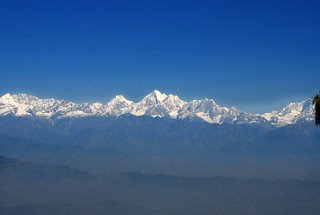 Word 'Picnic' always cheers me and in my school days friends used to label me as an expert in organizing picnics. I can't tell exactly why I was so fond of organizing such events in those days but I believe I do have a knack for making merry time. Needless to tell, I have treasured so many beautiful memories of those countless picnics I have organized in the past. Still I do remember vividly how I have bugged my litle head supervising everything and walked extra miles to make those events success. Though it's funny that, how friends used to be anxious about what dress to wear for picnic tomorrow and put lot effort to groom themselves but to contrary I used to worry not to forget stove pin or ghee for pulau and so on. Recalling those days, now I feel, I really was different character on the landscape. Anyway, good days are gone for good.

Last Saturday it was another picnic to Lkharui Bhanjyang. And this time it's not me but my hometown buddies who have arranged this picnic as a reunion party of old buddies. I assume it's been more than ten years gap in between the last time we went for picnic, so this picnic itself was quite an opportunity for all of us to meet old times buddies.

Lkharui Bhanjayang is a perfect spot for picnicking. It lies perched atop the pristine hill of Pokhari Thumko (18km from Kathmandu). Located at an altitude of 2000 m, approximately, this is another vantage point commanding panoramic views of the snowy mountain peaks. View of wide spectrum of the Himalayan range and the broad expanse of the Kathmandu valley from Lakhuri Bhanjayang is breathtaking. The northern horizon is an ideal location to watch spectacular views of sunset and sunrise. And we all enjoyed to full picnicking at this beautiful place. 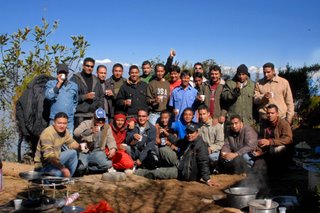 Group picture for ever lasting FRIENDSHIP. 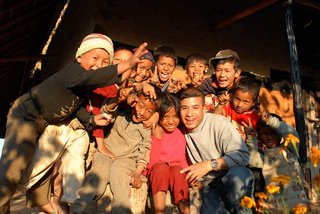 Making fun time with local children, who were so curious to see their instant pictures in my digital camera. I had wonderful time being with them and taking lots of their pictures. You can surf my photo blog to see more pictures of them. Click here 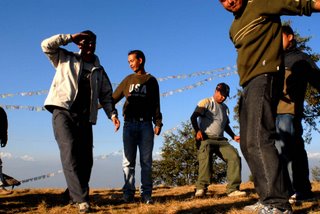 Lkharui Dance: Music and dance I think are very part of Nepali way of picnicking and how could we miss enjoying such joyful activities. And do I need to equip more words to explain euphoric we have had. 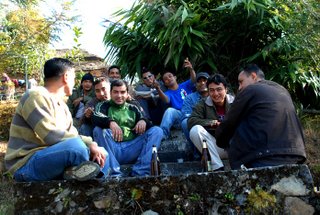 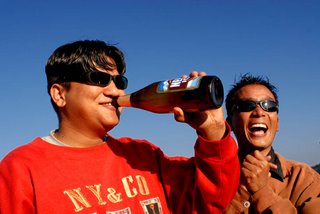 Subash, Shyam and their beer laugh. 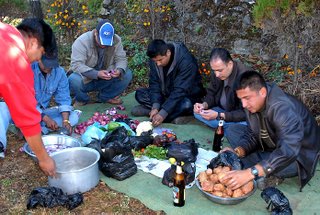 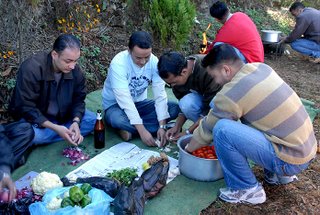